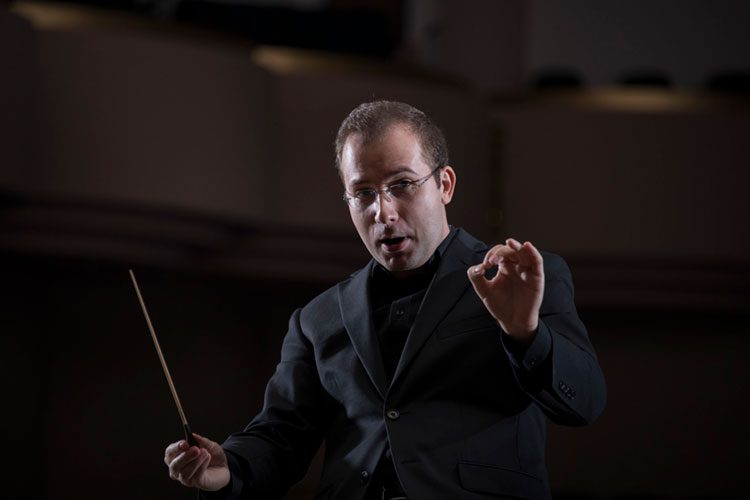 Fort Myers, FL – After an intense search for new artistic leadership that spanned the course of nearly three years, The Southwest Florida Symphony only had to look as far as its neighbor to the south, Naples, to discover who will lead Lee County’s crown jewel of arts and culture into the future. The orchestra’s board of trustees is overjoyed to announce the appointment of its next Music Director, Maestro Radu Paponiu. Maestro Paponiu also serves as the Associate Conductor and Youth Orchestra Director of the Naples Philharmonic and is now the sixth music director in the Southwest Florida Symphony’s 62-year history. “This is the beginning of a wonderful new era,” said Amy Ginsburg, the Symphony’s Executive Director. “Radu is definitely the right person, at the right time for us and fortuitously, he is in the right place geographically to make this a seamless transition.” Kathleen van Bergen, the CEO and President of Artis-Naples echoed Ginsburg’s sentiment. “It has been a joy to watch Radu’s artistry deepen and his talent gain recognition from musicians and audiences alike.  As a cultural neighbor, supportive friend and serious fan, I congratulate Radu on his appointment and wish him wild success as his star continues to ascend.”

Maestro Paponiu went on to say, “I am so looking forward to joining the Southwest Florida Symphony family and to bringing great music to the community. During my visiting week in April I was so taken by everyone’s eagerness to make me feel welcome and their dedication for music making. I cannot wait to build countless memories together.” The Maestro has already finalized programming drafts to complement repertoire selected for next season, further demonstrating his enthusiasm for joining the Southwest Florida Symphony family.

Radu completed his Master of Music degree in orchestral conducting at the New England Conservatory of Music, where he studied with Hugh Wolff. While in Boston, Radu was also conductor apprentice with the Handel and Haydn Society. In the summer of 2017, Radu was appointed assistant conductor of the National Repertory Orchestra in Colorado, as well as conducting fellow for the Cabrillo Festival Workshop in California. Radu participated in the prestigious American Academy of Conducting at the Aspen Music Festival and School as the recipient of both the Albert Tipton Aspen Fellowship and the David A. Karetsky Memorial Fellowship. In Aspen, Radu furthered his studies under the guidance of Robert Spano, Larry Rachleff, Leonard Slatkin, Patrick Summers and Federico Cortese.

Radu began his musical studies on the violin at age 7, studying privately with Carmen Runceanu and Ștefan Gheorghiu. After coming to the United States at the invitation of the Perlman Music Program, Radu completed two degrees in violin performance under the guidance of Robert Lipsett at the Colburn Conservatory in Los Angeles. As a soloist and chamber musician, Radu has appeared in festivals throughout Europe and North America, collaborating with artists such as Itzhak Perlman, Clive Greensmith, Martin Beaver, Merry Peckham and Vivian Hornik Weilerstein.

As Lee County’s only professional orchestra and the fourth oldest in the state, the Southwest Florida Symphony enters a new era. 2022-23 marks the orchestra’s 62nd season, which will be bountiful for the Southwest Florida Symphony with big name guest artists like Grammy Award-winning violinist, Gil Shaham and the return of Sphinx Competition winner, cellist Thomas Mesa, a Night at the Opera will return by popular demand and Maestro Paponiu has other delightful musical surprises in store.  As the Music & Artistic Director, Maestro Radu Paponiu will lead the symphony through foundational works—or Masterworks—and adventurous explorations—now the Brave New Pops series.

The Southwest Florida Symphony will continue to deliver its MainStage Concerts at Barbara B. Mann Performing Arts Hall, and will return to Punta Gorda’s Charlotte Performing Arts Center with its Brave New Pops Series after three years away. Smaller chamber performances—dubbed TinyConcerts—come first this fall, followed by Holiday Pops at three venues throughout Lee and Charlotte Counties. The season will ramp up quickly with those ambitious performances already on the schedule.

Details on the Southwest Florida Symphony’s season will be regularly updated throughout the summer and can be found at www.swflso.org. Subscriptions are on sale now and may be purchased by calling 239-418-1500 or emailing tickets@swflso.org.

Our Generous Sponsors and Partners